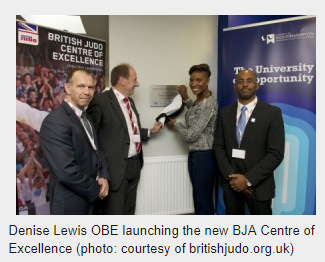 Tracks 2000 are delighted to be working with the British Judo Association and Wolverhampton University to deliver and fit the flooring at the dojo of the new UK Centre of Excellence. Based at the Walsall Campus of the West Midland's university the centre opened on November 12th 2013.

With two Olympic-sized mat areas, for up to 100 judoka, this is one of the largest and most advanced judo flooring project Tracks 2000 has undertaken.

“British Judo is proud to call this the home of our new performance hub.

“We have an excellent facility and we are very impressed by the speed in building the dojo.

“We look forward to a bright new future and welcoming all the new inductees to build a pathway to excellence. Ultimately we aim to deliver the first British Judo Olympic Champion through our centre.

"The centre itself will play a key role in nurturing some of the country’s best players in years to come, in particular Great Britain’s junior athletes between the ages of 17 and 22 years old - potential 2020 Olympians and beyond."

Widely used across Europe, Judo Floors are designed to reduce impact on landing rather than to give bounce thus protecting the sportsmen and women from injury. Similar technology is used in the flooring systems for all Martial Arts, Gymnastics, Tumbling and Cheerleading. Different characteristics for the floors are achieved by using specially designed rubber blocks set out in a specific sequence to reduce the impact on players when training. Tracks 2000 have fitted similar floors at key training facilities across the UK including Dartford Judo Club and Bath University.

Some of our valued customers

At Tracks 2000 we have one simple aim, to provide top quality equipment at competitive prices. Over the last 20 years we have listened to our customers’ needs and have developed a wide range of Gymnastics, Cheerleading and Freestyle equipment, specialising in Tumble Tracks, Sprung Floors, Mats and Training Aids.